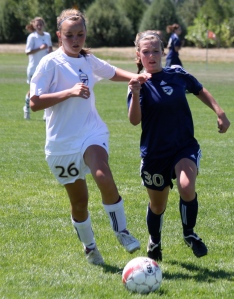 It is coming to that time of year where anxiety starts to set in with many families regarding the upcoming competitive club soccer tryouts.  There are obviously a lot of questions and insecurities heading into any tryout situation: what club should I try out for?  What team am I going to make?  Who are the coaches and what are they like?  Will I do well enough to make the team I want to make?  Should or can we even play this year?  With all the questions and excitement surrounding tryouts, it is really important to keep things in perspective, stay calm and do your research; so you know that you can make an informed decision and put your child in the best possible situation.  Many parents and players are receiving phone calls, emails or texts from coaches looking to recruit them into their club, letting them know how great they are as coaches or why their club is better than the other options and although these calls are very flattering, it is very important to look at the facts.  When you are joining a club, you are making a year long commitment which will have a significant impact on your family in terms of time and money, so you want to make sure that you put your child in a situation that will have long term benefits.  Too often people tend to look at the here and now, so pay close attention to what a club offers your player from now and beyond, as a club needs to be able to accommodate the growth and development of each individual player as well as the teams that they are on.  Before making a commitment to a particular club, make sure to look at the following and get a true grasp on what the facts are about a club, before making a decision.

The rising costs of club sports is really starting to take a toll on many families, so this is an area that really needs to be looked at closely.  It is important to definitely ensure that you get the most value for your money.  Many clubs will advertise a certain fee structure for their program, but then once you sign your registration form, apply different charges throughout the season.  Find out for sure what you get for your money before signing that registration form.  Aside from the registration fee, ask the club if they have any additional charges for:  Extra Training, Coaching Fee, Mandatory Camps, Goal Keeper Training fee, or other superfluous charges.  In addition, look at what type of scholarship program the club has.  Have they helped players out with money at all levels of play?  What amount of money do they put into their scholarship program?  The hard costs will definitely help you to make a better decision regarding what club to try out for, because again, you want to get the most value for your dollar.

When weighing your options, you want to make sure that you are joining a club that will be able to provide your player with what they need now and in the future.  Why is the overall structure of the club important and what questions should you be asking?

It is very important to look at what a club has accomplished over the years, how long have they been established and what the longevity of the program looks like.  A well established club will provide a player with stability, expertise through years of experience and a strong structure in which to develop.  There are many off shoot or satellite clubs in the state.  These clubs are affiliated with other clubs, but they aren’t those clubs, so definitely look at what the local club that you are looking to join has accomplished over the years.

At the end of the day, you want to pick a club that will provide your child with the best possible experience, regardless of what level player they are now.  You want to put your child in a situation that allows for them to be challenged and grow as a player and an individual.  A club should provide your child with the opportunity to advance levels of play as they develop, whether that is a Premier level player making the state ODP team or a Classic level player advancing to the Premier level team.  The viability of a club is dependent on how many members they are able to have, but attracting members shouldn’t be the sole priority of a club’s coaches or staff.  As a parent, take a look at a club that provides good value for your money, has an established structure in place that allows for growth and development and has a history of success in developing players and teams.

The Fort Collins Soccer Club strives to advance and foster the game of soccer among individuals of all ages by promoting sportsmanship, leadership, service, education and opportunity to the community through soccer.
View all posts by FCSC / Arsenal Colorado →
This entry was posted in Uncategorized. Bookmark the permalink.